Last Saturday, a number of teams gathered in Greenford to participate in the Conrad Ryan Cup.  This competition has been running for quite a few years now and is organised by the London Youth Committee and is done so to honour one of our former players, Conrad Ryan, who tragically lost his life in a car accident at the age of 18.  A fantastic gaelic player who unfortunately was prevented from reaching his full potential.  His mum, Bernie donated a fabulous cup and has always supported this event and appreciates all the clubs who get involved.

Although the conditions were not very spring like, there was a ‘spring’ in the step of our players as they started their games.  Below are a list of the matches and results and as we played each game, taking the other club’s games in to account, we secured a place in the final playing a very strong Tara team.  A closer game than in the earlier match meant that a winning result was nearly in our grasp but not to be.

The boys and management team should be very proud of their performances on the day and great to see so many players out at the beginning of the season. 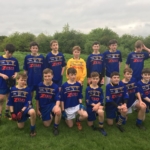 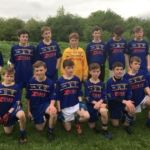