Our U6 team made a tremendous start at our first blitz of the year. It was great to see the teamwork, tenacity and overcoming of first match nerves. It is clear we have a very competitive young team and the other clubs coaches commented to Laurence and myself on more than one occasion that we are lucky to have so many players with natural talent already. Whilst there is definitely no formal recording of the scores at this age group we won both our games convincingly and someone may have accidentally on purpose recorded every minute of the game 😂.

We played St Clarets in our first game and kept the game very much at their end throughout, the McGinley twins (Shay and Leah) between them put five over the bar along with a great goal, Fiachra also took a great point and Dougie was close on several occasions and it was great to see him soloing and bouncing the ball (his point is definitely coming, he showed great determination). Hannah and Paddy Holland took to their first run out well and it was great to see all of our team looking out for one another and making all feel welcome and included. A special thank you to Daniel Wrenn who helped us out and put me straight on my team talk strategy before the game, a great little character who we hope to see again.

In our second match we played Tir Chonaill Gaels and again our approach did not change. There was more physicality and the opposition were putting in some very enthusiastic tackles which we coped with well and kept our heads and did not react. The magic McGinley’s put a further seven over the bar along with a further four great points from Laurence (Junior). Paddy Holland was getting involved in midfield and as his confidence grew he put in a determined wrestle for a ground ball at the closing part of the game (he did not give up the ball! – good man Paddy!)

All in all it was a great afternoon and the kids all enjoyed themselves. We will be sure to have further success and fun afternoons at the upcoming blitz’s and tournaments if yesterday was anything to go by! 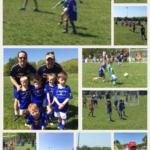