Well done to our Junior team last week who beat St Clarets 3 – 08 to 1 – 08 in the Mullarkey Cup QF.  More league football for them this week before playing Taras in the SF.  Our youth section had a marvellous trip to Finuge, Co Kerry.  They were warmly welcomed by Finuge GAA, Ollie Sheehy’s home club.  The players had some enjoyable games and plenty of fun.  There were many highlights from the weekend including the adults who met President Michael D Higgins and his wife, Sabina.  So many to thank but a mention must go to the host families who looked after our children who were fabulous.  Hopefully an account of the games and how the players did will be available to read soon. 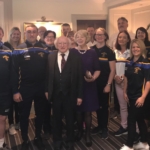 Half term saw a break from games but not training as preparation continued for games after the holiday week.  Plenty of football again for all and the U11’s are planning a trip to Birmingham to participate in the Sean McDermott’s tournament.  Teams from Ireland will be in attendance as well as other local teams; so plenty of competition to be excited about.  TV coverage also from Sky which is a bonus.  We wish everyone an enjoyable day.

Continued good wishes to all the children taking the remainder of their GCSE’s and A Levels.  Over the half way mark! Also many thanks to Mill Hill Golf Club and the catering team, all the golfers and sponsors of the event who attended our recent golf day.  Marvellous weather and a lovely venue.  Well done to all those who won prizes which were presented after a sumptuous buffet which rounded off the day nicely.  Winners and photo’s from the event will be available soon.

The club would like to pass on its deepest sympathies to Mick Griffin and family on the recent passing of his father Michael (Mike Tash) Griffin after a short illness. Mike hailed from Moulagh, Fossa, Killarney, Co Kerry.  Unfortunately it happened whilst the club was on their trip which saddened everyone concerned.  The funeral has taken place.  May he rest in peace.