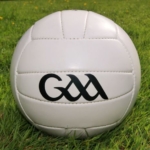 Parnells GFC had one of its busiest weekends in the Gaelic calendar both on and off the field.  The Youth Committee and members spent the whole of the week (and many hours beforehand) preparing for both the Golf and Commemorative Games Day.  Both events were a tremendous success; the golf on the Friday was attended by 72 golfers who enjoyed the stunning weather whilst challenging themselves out on the golf course.  We would like to thank all the golfers and sponsors who came along, full report and photos are in the youth gallery section.

Our youth section welcomed Ballyporeen/Skeheenarinky Juvenile from Tipperary whom we hosted for the weekend beginning on Friday evening with a challenge hurling game of which Fr Murphy’s were involved and a welcome evening.  On the Saturday they took part in our Commemorative Games Day along with other clubs.  An important day in which we remember so many past club members.  Silverware winners were Ballyporeen/Skeheenarinky in the Conrad Cup, St Kiernan’s in the Nora Togher Plate, Tir Chonaill Gaels Girls in the Brendan Lynch Memorial Cup and a mixed London Girls side in the Gerry Somers Shield.  Everyone remained at Harrow Rugby Club and enjoyed an evening of fun and entertainment.  Sunday saw the visitors partake in more outdoor fun at Go Ape and a quick visit to the London County Ground in Ruislip before their journey home.  Photos in the youth gallery section.

The Senior team played North London Shamrocks last Sunday in the Championship.  A close game with both teams matching each other point for point and with the half time result at 0-5 each it was anyone’s game.  A goal by NLS ten minutes in to the second half saw them take a three point lead.  Parnells had opportunities but could not capitalise on their possession at times.  Final result NLS 1-11 to Parnells 0-10.  Positives to take from the game and the lads will be ready to face their next opponents, Tir Chonaill Gaels this Sunday.

Also in action this Friday will be our U18 Girls in the ‘A’ League Final at Harrow Rugby Club, Stanmore, throw in at 7.00pm or earlier depending on the light.  Best of luck girls.  The U17’s Championship should be starting this weekend as well so we wish the boys the best of luck in their opening game of which details will be available soon.

The club would like to congratulate one of our goalkeepers, Evan Byrne, on the birth of his baby two weeks ago.  He attended his first match to watch Dad in action in the Senior Championship last Sunday.  The Club is delighted for him and we know Evan (Junior) is in safe hands!  Sadly the Club suffered another bereavement and deepest sympathies go to Ollie Sheehy on the passing of his uncle, Dominic Sheehy from Lixnaw, Co Kerry.  May he rest in peace.

Events:  Apart from matches and blitzes in September and early October, the club’s next special event is  our Youth Annual Presentation Day which takes place on October 13th in Harrow Rugby Club from 3pm onwards.  This is a great day of celebration of what the club has achieved on and off the field.  More details to follow.

The last summer training sessions are taking place for the last two Wednesday’s in September for the youth section up to U12 and all girls.  The U17’s will continue training and dates and times to be confirmed by Tony Griffin.  Senior team training is currently taking place on a Tuesday and Thursday at 7.00pm.  The season continues and Parnells are always happy to welcome new players at our bases, Harrow Rugby Club and Northwick Park, across all age groups and ability.  For U6-17 please contact Colin McGuinness (07779 340398) or Veronica Bailey (07768 635534) and for the Senior/Junior teams, please contact Tony Griffin (07966 160999) or Dennis Diggins (07768 352680).