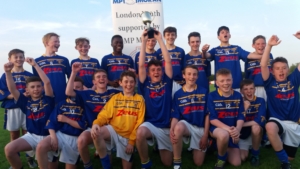 On a warm Summer’s evening at the Irish TV grounds in Ruislip, a superb defensive display by Parnells that Dulwich Harps could not find an answer to, led to a final to remember for the boys in blue.

A strong Parnells start immediately put pressure on Dulwich, looking very strong in the tackle against a Dulwich side who seemed to have a huge physical advantage. Parnells looked to take the initiative with an aggressive fast press against Dulwich, who started slowly. It was this fast press, coupled with an exciting move down the left hand side, which led to Niall Twomey opening his account from half forward. A wonderfully taken score from just outside the 21m line gave Parnells a richly deserved lead.

Another score by Paddy Gilroy followed and, as Dulwich struggled to get out of their half, the ball was stolen by Parnells’ Patrick Murphy who gave a beautiful low ball inside and allowed Niall Bradshaw to place over the bar for a three point lead.

Murphy was a thorn in the Dulwich side all evening, and the provider turned scorer of the game’s first goal; firing low into the goalkeepers right hand corner for a great finish.

After a wonderful save by Jack Curd in goal for Parnells (Dulwich’s first effort of note) a swift fast break down the Parnells’ right resulted in, full forward and captain, Niall Bradshaw sending a shot crashing off the Dulwich crossbar only for the ball to be driven to the back of the net by Paddy Gilroy on the rebound.

Parnells maintained their dominance throughout the early exchanges with, man of the match winning full back, Jojo Thabo often setting the tone with an immense performance at the heart of the blues’ defence. A number of stunning blocks showed just how committed Thabo and his teammates were to getting their hands on the trophy.

However, Dulwich knew they were not beaten yet and, after two well taken scores from free kick specialist, Samuel Adenola, they hit back with two quick goals. Armani Orji struck first with a driven shot from close range, which Curd was extremely unlucky not to stop, pushing the ball high into the top left hand corner of the net. This was quickly followed up by a stunning strike from Adenola who thumped a right footed pile-driver past a helpless Curd.

Two more quick scores from Dulwich followed, roaring back in this five minute spell to take the lead for the first time in the game what looked like it could be a one point lead at half time.

Not to be outdone however, the captain Bradshaw came up with a moment of brilliance to spark his team back into life. Picking the ball up about 30m from goal, following a clever pass from Lavery, he drove at the heart of the Dulwich defence turning his marker inside out, before burying the ball low to Dulwich ‘keeper Sam Braddick’s left hand side. It was exactly the thing Parnells needed to re energise themselves, and another point by Ronan Hutchins followed on the stroke of half time to leave them three points up at the break. (3-04 to 2-04).

A more balanced start to the second half ensued, with both teams working hard to try and get possession of the ball, but it was again Parnells who drew first blood. With probably the team score of the game, the ball was worked up the left wing through a series of quick hand passes before a superb strike from Twomey sent the ball through the posts for his second score of the game.

Parnells continued to pull away as the half began to open up with great points from wing back Darragh Griffin and Bradshaw again to create a six point lead and breathing space for the workman like team.

What looked like a possible turning point in the game was a superb block by Dulwich corner back, Ademola Adetola, where it looked a certainty that Murphy would find the back of the net and potentially end the game as a contest. Directly from the block, Dulwich stormed up the field and won a debatable free, from what looked like a fair challenge by the colossal Thabo. This was duly converted by Adenola and Dulwich were back in the game.

The game now ebbed and flowed as both sides searched for the momentum that would push them towards the trophy. Eoghan Reilly and Sam Langan worked tirelessly for Parnells, providing key interceptions when needed most by their teammates, in a midfield battle that proved key in the outcome of the contest. Another free from Adenola followed. It looked like the inspirational midfielder just could not miss. This was followed up by another Dulwich score and they were coming back once more.

Despite the change in momentum, Parnells maintained their threat on the break, but what looked like a combination of tired shooting and poor shot selection, really kept Dulwich in the game and allowed them to stay in touch rather than Parnells easing to the trophy.

However, a moment of magic from substitute forward Ben Brown seemingly sealed the deal for the blues. After making a darting run in off the left wing, leaving his marker for dead, wing-forward Paddy Gilroy found Brown with a cross-field pass. From there Brown took the situation into his own hands, shaking off the full back before sending a searing shot over ‘keeper Braddick, crashing of the underside of the bar and in. The Parnells fans erupted, with the now six point lead seeming unassailable at this point.

Dulwich fought back valiantly, scoring a late goal through, half forward, Attu Gyedu and would have perhaps scored another if a square ball was not called against Blake Williams.

It proved to be, however, Parnells evening in the sunshine, with fantastic performances from Thabo and wing back Griffin. Beanón Corrigan and Aidan Doran were majestic in their respective defensive roles, intense in the tackle and intelligent with their distribution. Cormac O’Brien and Daniel Mullin were resolute in their duties and both made valuable contributions to the eventual outcome. Niall Twomey ‘on the forty’ was the orchestrator of many raids into Dulwich territory and had willing and able accomplices in Paddy Gilroy and Ronan Hutchins. Daniel Rossiter and Harry Grey also contributed hugely in ensuring the long wait is over. Ultimately, this victory was the culmination of the hard work put in by the whole squad in both training and in the preceding 5 matches. Dulwich for their part should be commended for their contribution to a super game of football. Their sportsmanship and never say die attitude was evident throughout.
And so the long 10 year wait is at an end for Parnells in this competition. For Dulwich the championship will be the new focus. If the main course is as good as this encounter we are in for a treat. Roll on the championship.

The score finished 4-7 to 3-7, leaving the blues Under 14 League champions.

Man of the Match: Jojo Thabo