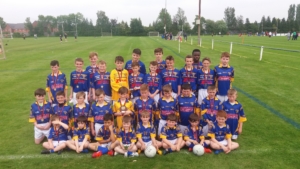 Slowly but surely the seats on the bus filled up and at 8.15am the under 8’s, 12’s and 14’s set off for Coventry. It was the supporters occupying the rear seats of the bus led by Dan and Pat who were the liveliest at this stage. The players were relatively subdued no doubt saving their energies for the action that lay ahead. The trip was a smooth one punctuated only by a couple of pit stops, one for caffeine refuelling and the other for a call of nature. Fintan was playing the bus conductor role selling tickets for the Epsom Derby sweepstake and so we were all set for the day.

Soon we were disembarking at Roger Casements grounds and were warmly welcomed by our hosts who have impressive facilities with superbly manicured pitches, a stand and a club house. The atmosphere was good, the music was on and the smell of the barbeque was proving too irresistible for some of our members.

Teams representing Liverpool, Manchester, Birmingham and Coventry, as well as our own busied themselves setting up camp and organising kit. We were given the match schedule for the day and were now ready to play.

The games came quick and fast and when it was all over Parnells had claimed trophies in all age groups they played in. Pride of place must go the under 8’s who playing in their first ever tournament outside of London performed magnificently in all of their matches and were presented with the under 8’s Anne Boyle Cup at the end of the day. The under 14’s also won their Cup putting in some fine performances and the under 12’s also brought home silverware in the form of the Shield which they battled hard to win.

It was a very successful and enjoyable trip not least because of the good football played but equally due to the camaraderie amongst the players and mentors/supporters from the different age groups which can only strengthen the community and social spirit of the club.