It was a change of scenery for the Parnell’s under 10’s as they headed along the M4 to Reading for the very first St. Anthony’s Youth blitz.

The majority of our players were otherwise engaged on the day of the blitz but we made up an under 10’s team with the help of some willing and able under 8’s who were playing up an age group level.

Tommie Logan, Lorcan Moriarty and Tadhg O’Slatara played superbly and did not look out of place amongst the older boys and girls. The team was completed by seasoned under 10’s namely Joe Loughery, Killian Griffin, Tommie Mayne-Sheehy, Alex Hipwell, Alex Wilson and James Keegan.

With a small yet spirited group of supporters we were ready for the fray.

We played three games in all and it must be said that each game was keenly contested with some great football played by all teams.

Our first game was probably our toughest challenge. We came up against a very good Tír Chonaill Gaels outfit who opened with the first scores. Our lads came storming back into it though and by the time James Keegan and the two Alex’s had arrived, freed from the Reading traffic, the ship had been steadied and was back on course.

Now with a full panel of players being employed to their full potential by manager Mick Griffin, we finished the game very strongly and showed that we had the determination and skill to offset the challenge of our athletic and skilful opponents.

Our second game was against Tara’s 1 and again this was a stern test for us. By now though we were gelling nicely as a team with the under 8’s playing tigerishly and forming solid partnerships with our older lads throughout each zone.

Our good play continued into our final game against Tara 2 where the football was free flowing and end to end. We scored some lovely combination scores, many starting with a turnover by our defence with quick and accurate passing through the zones finishing with the ball sailing between the uprights.

Here are some observations of what our lads were getting up to:-

A final note of thanks to our hosts St. Anthony’s, who in their first ever blitz, made sure the games were organised well with referees provided. We wish them every success for future blitzes.

Under 10’s and Supporters enjoying the day at Reading. 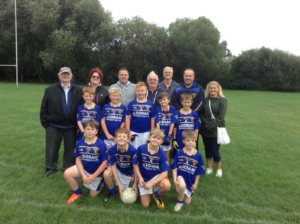 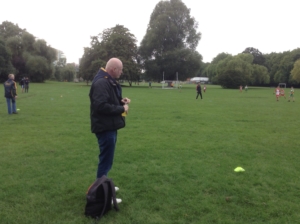