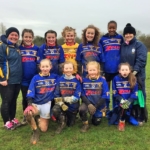 Parnells U14 Girls had their first outing of the season for the first Provincial Tournament of 2018 at Greenford (TCG) on Saturday 10 February 2018.

Teams travelled from Scotland and Birmingham to participate – along with us, Taras & TCG, it was going to be a great day of football.

From the first minute we had stars in all our players and all girls were 100% committed and greedy for the ball. Team work shone its way through – with U12s Eva, Ciara, Ava and Sorcha who’ve now moved up – these girls were supported and encouraged throughout with experienced players in Alice, Brea and Rhianna.  Management were impressed with how the girls played in horrendous icy conditions which then turned muddy, they never once moaned or complained and started and ended their day in a positive winning mode by securing victory against Tara girls.

We look forward to working with these girls in the future and the rest who could not make this event.  Thank you too to the girls, parents and all the other clubs who togged out in awful windy wet and cold conditions. Pitches deteriorated as the morning went on yet all girls battled on.  The club would like to thank the organisers and those who helped at this this event; it was a great start to season.