By Irene Sheridan Sat 26th May 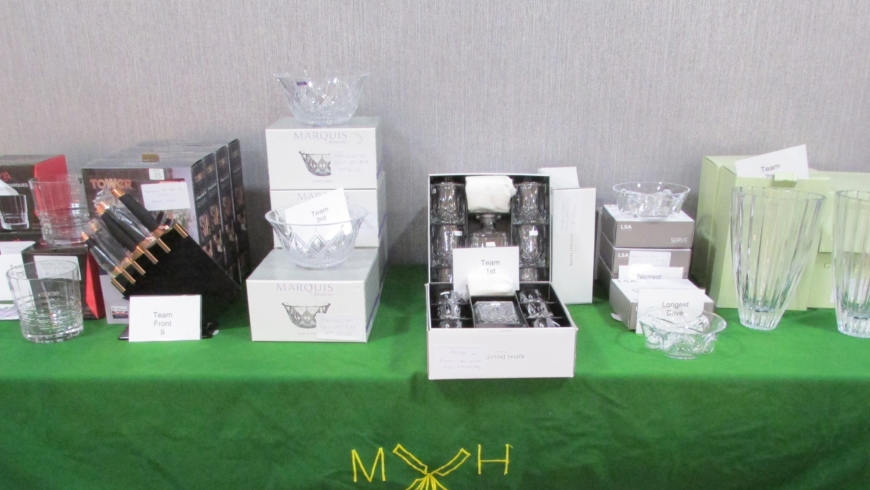 Parnells enjoyed an extremely successful golf day with fantastic weather and a record number of teams competing.  When the golf was finished, the golfers, the committee and friends of Parnells gathered in the Clubhouse to reflect on the day and exchange anecdotes.  After partaking in refreshments they moved into the dining area where the Clubhouse staff had the Carvery ready and the queue’s formed.  The golf had given everyone a great appetite.

As the evening moved along and the meal was finished, Dennis Diggins took to the floor to give his welcome speech.  A list of thankyou’s ensued:  Mill Hill Golf Club (in particular Dorothy (Secretary), the bar and pro shop staff and the catering team.  These were then followed by those who had contributed to the golf organisation:  Joe Murphy (Grand Designs) for the signage, Gerry Gardiner (GGH) for his gathering of golfers, sponsors and overall organisation and contribution and to Neon Mavromatis from Kerry London Insurance for the sponsorship of prizes.  Recognition was also given to Lee Cousins from Hendon Football Club for his generosity in offering a free Advertising Board at Hendon Football Ground next season.

Last but not least thanking everyone who attended and to Margaret Farrell and Joan Regan who worked tirelessly the entire day and provided help anywhere and for anyone that was needed and asked.

There were a large amount of prizes that were waiting to be awarded and Dennis announced the winners who were applauded and received some special giftware.  Brendan Vaughan made sure he captured the gleeful smiles on camera and Irene Sheridan (Club PRO) tried her hand at replicating his camera skills with her own camera.

With the formal events of the day drawn to a close it was nice to see current and past members of the club relax and mix with sponsors and supporters in the final hours of the evening.  Parnells would like to thanks everyone that contributed to a very successful 16th Golf Day and their continued support and look forward to planning 2019’s event.

For more photos, please go to Gallery and click on Senior page.