The ‘girls’ are back in town

By Irene Sheridan Sat 18th May

The coaches that look after the girls, in particular, Liam Moffatt and Michael Healy have been busy over the last few weeks.  Below is some of the feedback they have sent me as PRO.

Michael Healy was delighted with the girls when they took to the field in Greenford at the Peter McGlynn Day.  Although they had the four seasons with the weather, eleven girls never complained once.  Unfortunately there were a few injuries in the games and one broken finger. (Ruby Ruddy get better fast, we need you!) .  Michael concluded ‘all I can say is we played our hearts out and never gave up, improving in every game….mums and dads should be proud of such wonderful girls who were so well mannered’.   As Michael said ‘bring on our next battle’. 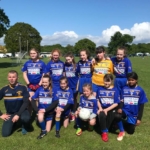 Liam Moffatt is delighted with the progress of the girls in the League this season.  Further games have been played in the last couple of week.  On the 10th of May, the over 14 girls played against two Tara sides-Green and Gold.  The girls fine form continued beating Taras Gold 1-12 to 1-06 and followed that by beating Taras Green by 1-11 to 0-01. Some fine football played and shows signs of a good and promising season ahead 👍.

The U14s played in Greenford against TCG, unfortunately they suffered a heavy defeat but then had a really good game against NLS and lost by just 4 points, 3 – 7 to 3 – 3, a narrow defeat but a cracking performance. Definite progress being made, hopefully their first victory is around the corner.

On the 17th May the O14 Girls had a tremendous win against NLS/KIR.  The girls really has their shooting boots on.  However the win has to be seen in the context of facing an inexperienced and relatively new team.  It was pleasing though to see the focus of the girls and their use of the ball, their experience was evident from the start.

We look forward to further updates.  Keep up the good progress girls.