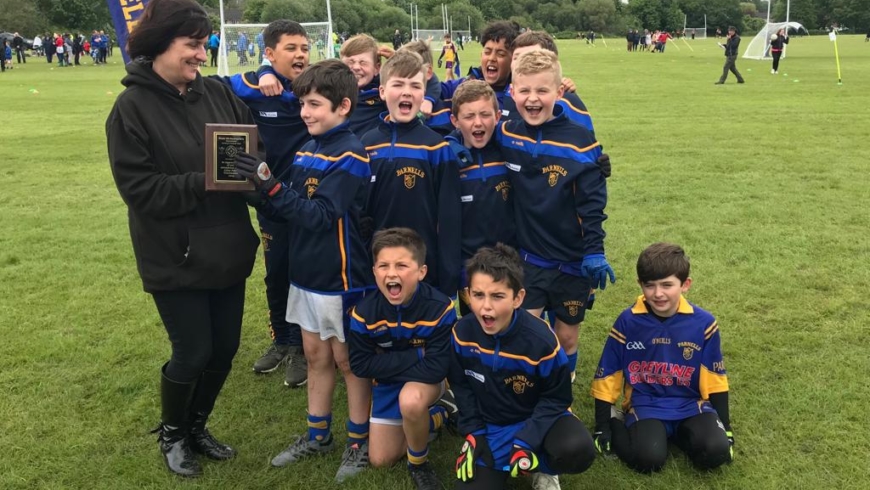 It was an early start for over thirty club members on Saturday 8th June.

The welcome smell of coffee and fried bacon (thanks Veronica) wafted around the clubhouse at Wood Lane as we awaited the arrival of our bus which was to take our U11s to Birmingham for the Coley Folan Memorial Tournament.

As we headed up the M1 the rain got heavier and more persistent forcing some of us to re-check our weather apps for the latest update.  It was not good news, however we consoled ourselves that it may not be as bad as forecast. Our squad of 13 paying no heed to such trivial things had already started singing heartily – some song about the garden shed which the rest of us grew to know well by the end of the day.

We arrived at our destination shortly before 10am and in good time to prepare for our first fixture which was against Erin Go Bráth at 11am.

Under incessant rain and a strengthening wind some of our gang set up the gazebos whilst others brought the kids into the warmth of the big hall in the Land Rover Clubhouse, which at this point was teaming with young players togged out in a variety of club colours.

We settled into a section of the big hall which was to become our base between games and also for a few sociables later on.

After some refreshments, the players togged off and we were ready for the fray.

Playing with the wind in the first half we had the majority of possession and after a few wides we settled down and started playing some excellent football.  We put together some lovely passing sequences ending in some good scores being registered.

In the second half against the wind we were less prominent in possession but finished the game on top with only the concession of a solitary score against a very good Erin Go Brath side.

Our next game was against one of the Dublin clubs which had made it across the sea for the tournament. With the rain and wind still persisting we had plenty of possession but were rushing our shots at goal and found it hard to score and missed a number of good opportunities.

We kept plugging away against a tough tackling and well organised Round Towers team and our persistence paid off when we got the goal we deserved.

It was not enough though and the opposition were not as wasteful in front of goal especially in the second half when with the wind they started to press our kick outs and despite some heroic defending on our part, they got the crucial scores. In the end it was the goal that separated us.

In our next game we faced the other Dublin club, Ballinteer St. John and this proved to be a very close and somewhat tense encounter.

This time playing against the wind in the first half we reached half time just one point behind.

The second half was evenly balanced with Ballinteer organising themselves well against the wind. Both teams had chances but could only manage a point a piece, leaving the Dubs in front at the finish by the narrowest of margins.

Our final game saw us pitched against the host club. We summoned up our energy one last time and with quite a few positional changes began the half very brightly. Although well in front at half time we conceded an early goal in the second half which made things interesting for the final few minutes. However we redoubled our efforts and finished the day the way we had begun, with a victory.

Overall it was a great day and on reflection it must be said that all the boys including the under 10s did extremely well.  With a bit of luck we might have turned the close defeats into close wins.

Footnote:  The club welcomed the opportunity to participate in this tournament and would like to thank Sean McDermotts for the invitation and hospitality.  It is great for the players development to have the opportunity to play different opposition from outside London and especially from Ireland at this age.   Also a massive thank you to Tim – chief organiser – and the other mentors and adults that travelled.

More photos to uploaded to the youth gallery section soon