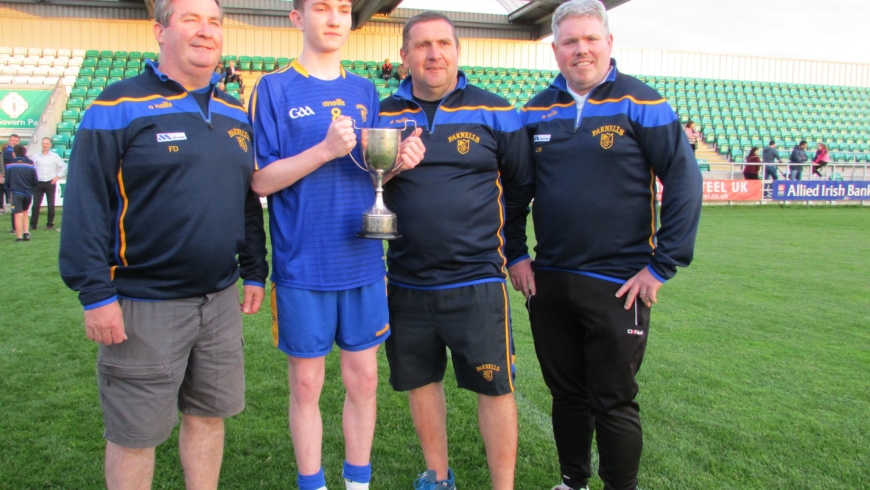 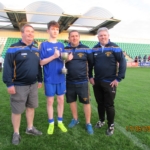 Parnells were out in force and had massive support in the stand for this young team who had done so well in their earlier league games to reach this final.  Many of the team have also had additional county duties as they have been training for Feile as well.  The game got off to a storming start as within two minutes the ball was in the back of the net with a super goal from Caolan McLaughlin and was swiftly followed by a lovely point from Rory Welby.  However the tide turned quickly when TCG found the back of the net one minute later.  Although TCG were playing in to the low setting sun they still managed to score two points.  Parnells stemmed the tide when Pearse Kerr made a great interception and won a free, converted by Conor Griffin responded with his first point on the scoreboard.  Ten minutes in to the game, the score was level 1 – 02 each.

TCG were playing very centrally and had a couple of strong players who were hungry for the ball and keen to take everyone on as burst through players and made their way down the field.  However Parnells defence worked hard and turned over ball sending it back up the field, edging into the lead with two goals in three minutes.  TCG were not giving up and responded with a goal.  The pace of the game was certainly at a high level.

As the half progressed into the last 6 minutes, Parnells played with more resolve.  Sterling defence by Joseph O’Connor took the pressure off and the team settled into more of a rhythmic play, great short passing and the forwards working together.  Pressure by our forwards resulted in a number of 45’s of which one goal came from a goal mouth scramble (I missed that scorer) and then after some good defensive work by Conor Griffin and excellent forward play by Declan Doran, Finn Foody put it in to the back of the net.  Almost ten minutes later another goal drifted in from long range by Declan Doran.  The last points of the half were scored by Connor Moran and Callum Fitzgerald.   As the half time whistle blew up at 8.51 Parnells led 4 – 04 to 2 -02.

The opening minutes of the second dealt a double goal blow to Parnells.  Their number 14 burst through the field for the first one and then a penalty.  TCG got the bit between their teeth and the wind in their sails scoring another point with no response from Parnells.  They seem to be ‘behind’ their opposition and needed to attack the ball more.  A penalty to Parnells scored by Callum Fitzgerald gave them the boost they needed along with a long range shot by Conor Griffin taken from way out the field which resulted in a goal; Parnells were ‘back in the game’.  TCG refused to give up and piled the pressure on, our lads were putting their bodies on the line.

An opportunity on goal was narrowly missed by John Horohoe but Parnells kept their heads and narrow lead and with the last point of the game by Rory Welby, the whistle was blown and Parnells had won.

All players contributed to the win and apologies if not everyone got a mention.  It was great to see the impact that the substitutions made showing that it really is a squad game with every player having a contribution to make whether they start or finish.

Well done to all the team and to Tony Griffin and Fintan Doran.  It is the club’s first silverware of the season.  The club would like to thank all the parents, families and friends for their support on the night and their continued support throughout the season.

See the Youth Gallery Section (list to the right of page) and double click on the U15 Final.