Parnells was deeply saddened to hear of the passing of a great GAA man, Tom Connolly (aged 75), who played with Parnells for many years.  It has been both insightful and a pleasure to read the hurling history of Tom Connolly who is held in such high esteem for his hurling achievements with Brian Boru and London.  However it would be remiss of our club if we did not collate a few tributes of our own.  He also was a fantastic footballer who was part of Parnells team who won the Senior Football Championship in 1971 and 1979. 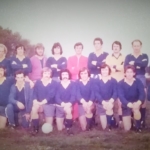 Originally from Abbeyknockmoy, Co Galway, Tom came to London aged 15 and played in New Eltham in 1961. Hurling was in his blood, as it was with his brothers (Martin, Brendan and Billy) who also played for Brian Boru.  He became a first team player for Brian Boru at the tender age of 17.  His hurling success has been documented and indeed Tommie Donohue, also a great duel player with the same clubs, recalled how his former teammate had a ‘will to win’ and ‘ he’d put his head where most people wouldn’t put their foot’…’He was brilliant; once he got that ball there was no stopping him.  You couldn’t mark him; he was just so strong and powerful.  He was like a mini tank’.  He added:  If you ask me, was he a great? His record stands.  He’d have to go down as one of the greats-he had no fear’.

As the news spread of the sad passing of Tom amongst the Gaelic community, a few past players contacted the club and wanted to record their own acknowledgment of Tom’s contribution to Parnells.  Three were fellow teammates who knew that when Tom played with them, the team did not fear anything.

Norman McCarthy sent his own short message: “So sorry to hear of Tom Connolly’s recent passing. I played with Tom throughout the 70’s, he was some character and a tough fellow. I met him when I went over to Martin Diggins’ funeral and enjoyed a couple of pints afterwards with him & Senan Hehir. We met in Dublin later for the last time at a match in Landsdown Road when David his son was playing. May his soul Rest In Peace”.  He commented that it was when we lose a close friend in the club it makes you want to be them all again.  ‘My heart is still with the Parnells & always will be’, a lovely sentiment.

Tom Roche both played and managed Tom Connolly in the mid-seventies and early eighties.  He recalled the many qualities of Tom both on and off the pitch.

“A superbly fit man who was ahead of his time.  He could play defensively or in attack and moved effortlessly up and down the pitch.  A man who would never ask someone to do anything on or off the field unless he would do it himself’.

This is always a trait of a good club man who didn’t need to hold a position to contribute, similar to Tom Farrell.  “He had a voice and presence and gave many rousing speeches and although never captained Parnells, he spoke as one and gave encouragement and maintained a positive attitude all the time”.

Pat Canavan maintained contact with Tom after they both finished playing and when it came to football he called him a ‘serious operator’!

“It was with great sadness when we heard of Tom’s passing. Tom was a serious GAA man. I first met Tom and played football with him for Parnells in 1978. He was a brilliant hurler as well, and fixtures clashed on occasions and we (Parnells) were always at a great loss when that happened.

Tom was never afraid to speak his mind, and always stood up for his team mates no matter what. If a club had 15 Tom Connolly’s they would never be beaten.

In later years, I met Tom socially on a number of occasions in Conways 3 and Ruislip – the topic of conversation was always GAA, especially when meeting old rivals.

The last time I spoke with Tom, was a week before his passing, he was in great form following his return from Ireland.

Rest in peace Tom, you will be sorely missed.

Tom was also remembered by the younger players in the Seventies that were coming through.  Dennis Diggins knew Tom since he was a young lad watching games out at New Eltham.  He recalled his first senior game against Round Towers in Clapham when he was playing corner forward and was struck in the face before the game started. “Tom, who was playing corner back, ran the full length of the pitch to ‘remonstrate’ with the opposing player and ‘battle’ commenced”.  You can read between the lines!!   “Tom was a very tough man indeed”.

However sadly missed by the Gaelic Community Tom will be, I am sure it will be his children, Caroline, Samantha and David, grandchildren and his wider family that will miss him most as they do their late mother, Margaret.  Our heart and prayers go out to them during this period which has been made even more difficult by the wider battle the world is coming to terms with.  When the time is right, I am sure everyone will be able to recall their own memories with them in person.  Until then, we can but try and extend our sympathies through the written word and phone-calls.

Former Parnells Chairman Joe Regan called Tom one of London’s greatest-ever hurlers and footballers, and a fantastic servant of the Parnells club.  An emotion that is shared by us all.