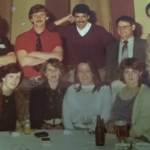 Throughout the years, footballers travel from Ireland and play overseas; London and many other provinces benefit from this.  As a club, we have always welcomed players from across the many counties and clubs who enjoy their time with us whether it be short or long term and we welcome their camaraderie, experience and contribution.  Friendships are forged and bonds made for years.
When the club received news of the death of one of our former players, D.J. O’Shea who hailed from Eyeries, Beara, Co Cork, we were shocked.  A great character and player, he came to the club in 1979, having spent a short spell with CuChulainns when he first arrived in London.  He had great footballing ability and was part of our club’s successes up to 1985.  He also played for the London team while he was here as well.

He returned to Ireland in the mid 80’s (his home club being Urhan GAA) and played with Cork at Junior level in the forward line and was part of the team when they played London with London winning that game.  DJ had many friends within the club, Bobby O’Dwyer and Lenny O’Sullivan, to mention just two, who both came from the same area.

Parnells would like to extend their heartfelt sympathies to his partner Ann, sisters Mary, Noralene and Cathy and all the extended family and community who will be heartbroken and grieving.

D.J’s funeral will take place in accordance with Government and HSE guidelines.

Requiem Mass will take place at 12 midday on Monday (4th) followed by burial in Gortnabulliga Cemetery.

May He Rest in Peace. 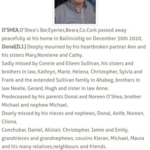