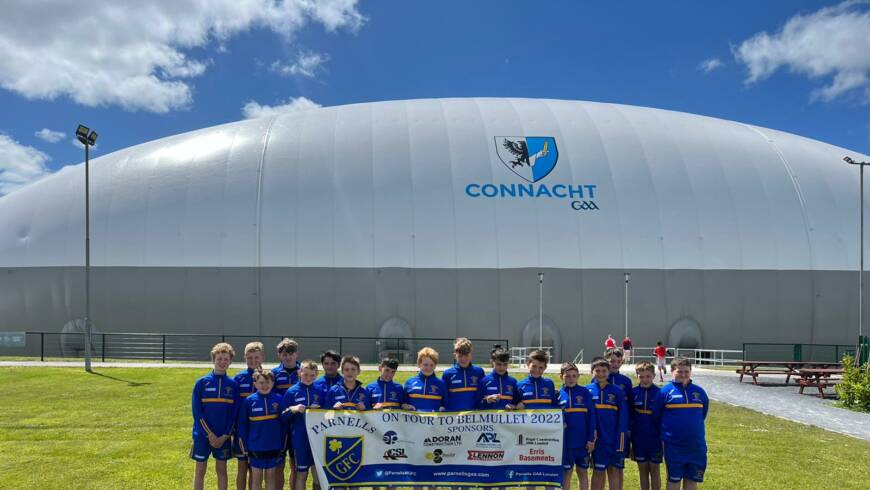 In May of this year, our boys under 13 team were invited to travel to Belmullet, Co. Mayo to take part in some local challenge games.

A total of 74 travelled, with an early start leaving the clubhouse Friday morning and heading to Stansted by coach. Landing in Dublin, we were meet by Stephen Gaughan (Speedy Stevie) our driver and entertainer for the weekend. The weekend started with a guided tour of the famous Croke Park stadium, the home of GAA. This was a great experience for both the boys and many of the adults, many of whom had never visited the stadium before. It also provided them with some more knowledge and insight in to the whole GAA.

The group then headed West, stopping off at Feericks Hotel, Rathowen for something to eat and then continued on to Belmullet GFC clubhouse that evening.

We were meet with a warm welcome by club Chairman Pat Cowman, Club Secretary Roseleen Reilly along with Aidan Barrett and all the other host families. With the boys meeting their hosts and heading off, the rest of the group checked in at The Broadhaven Bay Hotel.

Saturday morning seen everyone gather back at the clubhouse, where the boys would play two games.

Playing against Belmullet GFC first and on a bigger than usual pitch, with a strong Atlantic breeze against them it was something that the boys had to try and adapt to pretty fast. It was a great spirited game with some lovely play and scores from both sides with Parnells just coming away with the win.

Killcommon GFC a neighbouring parish club was our next game, in which seen the boys really pushed to their limits. Being six points down at half time and some heads dropped, the lads gave it there all in the second half and came away with a 4 point win.

A presentation by both clubs and refreshments was laid on in the clubhouse after, and with the sun starting to appear through the clouds, there was only one place to head to after, the local beach Clagghan Island.

The group made the short journey out to the Island where everyone enjoyed the beautiful scenery and beaches for the rest of the afternoon.

That evening saw all the Parnells parents and children gather in the Broadhaven Hotel where the host families joined them for a meal and drinks in to the night.

Ryan Donoghue, a local hero and Mayo Senior footballer joined the group on Sunday morning before we checked out of the hotel, signing autographs, photos and talking to the boys about their games. A big thank you to Ryan for giving up his time and meeting the lads.

Once everyone was finally checked out, we hit the road again by coach with the Belmullet u13’s team joining us in search of the newly opened Connaught Centre Of Excellence.

This was an amazing experience where both the boys and their travelling siblings got to take part and play two games against Belmullet GFC in the brand new indoor air dome.

A final short journey to Knock airport seen us say goodbye to both the Belmullet teams/management and Speedy Stevie, who were both amazing hosts the whole weekend.

Arriving back at Stansted Airport, this group didn’t want the party to end. There was new songs and more laughter to be heard all the way down the M11 back to Harrow.
Sadly all good things must come to an end, and on arriving back to HRC everyone said their goodbyes.

This was an amazing experience for both the boys and the parents. One which brings the whole group closer together.

A huge thank you to all the sponsors for making the trip possible, and also to Mags McGuinness for all her time and effort in to organising it.

Again a big thank you to Belmullet GFC for their hospitality and for hosting the boys. It’s an experience they will always remember.

Pictures can be viewed in our gallery here