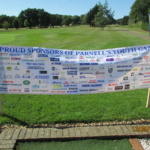 The organisation of the golf day had been going on behind the scenes for some weeks in the summer.  Spearheaded by Martin Reilly, golfers and sponsors were committing to participating on the day and making the event successful.  Numbers and sponsors ebbed and flowed but by the time Friday the 13th of September arrived; a sunny day where the sun and the golf would ‘sizzle’, the golfers came out in force at Stanmore Golf Club.  Initial numbers entered were high and then even more turned up adding to a club record of 72.  The scene was set for some very competitive rounds of golf!

With lovely prizes and the sponsor banners on display in the clubhouse, the golfers had their tea/coffee, bacon rolls or ‘other’ light refreshments, catching up with friends and then taking to the practice area (the serious ones) and walking to the first tee.  They were met there by Irene Sheridan who was capturing the groups on camera and even some of the tee off shots.  The last of the groups went out around 2.00pm. 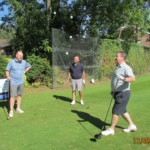 The golfers returned to the clubhouse as the rounds finished and sat outside enjoying the late afternoon sun.  Plenty of talk about missed fairways, green shots that almost made it ‘in the hole’ and banter about ‘what could have been’. 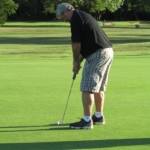 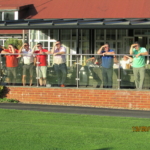 Score cards were collected and checked by Martin Reilly and the winner’s names ready to be announced after the evening meal.

The scores were close and the following golfers were successful.

Colin McGuinness (Youth Chair) thanked everyone and explained the work and organisation behind the scenes for the golf and youth committee.  The numbers of youth players continues to increase and the golf sponsorship enables the club to ensure they have a safe place to train and the correct Gaelic gear to use and wear and opportunities to travel on the annual trip and other games in and around London and the other counties.

Special mentions to Martin Reilly (chief organiser and Youth Treasurer), Veronica Bailey (Youth Secretary), Irene Sheridan (PRO), Colin McGuinness (Youth Chair), Ollie Sheehy (Vice Chair), Mick Griffin (manager) and Laurence Wrenn (manager) – all of whom helped out in one way or another on the day.  Plus Michael Healy, Jo Murphy, Tony Griffin, Fintan Doran, Laurence, Ollie and Colin for ensuring that we had sponsorship on the day.

Also to Declan Doran (son of Fintan) who helped collect the sponsor signs in after the event was finished.

A raffle was carried out where everyone was very generous and the evening rounded off nicely.  The club is very lucky to have such support and look forward to welcoming everyone back in 2020.

For more photographs, visit the Gallery and select the Youth Gallery and file on the right hand side.