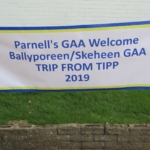 Parnells GFC were delighted to welcome Ballyporeen/Skeheenarinky Juvenile to our youth club base at Harrow Rugby Club on a weekend which saw fantastic weather, great Gaelic football and hurling, accompanied by lots of fun and entertainment.  Parnells GFC went to Ballyporeen in 2017 and were met with warmth and friendliness and the ‘Tipp’ club were magnificent hosts so we were delighted to be given the opportunity to be return hosts.

It coincided with the clubs annual Commemorative Games Day which also gave the chance for the visiting club to avail of some competitive games.  Our visitors arrived on the Friday evening after a long trip by ferry.  31 adults and 22 plus children disembarked the bus, however their tiredness did not stop them playing a friendly hurling game against Fr Murphy’s under floodlights and it was great for the mentors and children to meet another London club.

After the hurling everyone went in to the clubhouse for food and refreshments and Colin McGuinness made the first of many speeches that weekend; thanking Fr Murphy’s and welcoming Ballyporeen/Skeheen and reflecting on Parnells visit back in 2017.  Their club chairperson, Patrick English and coaches Robbie Quinn and Richie Vaughan were excited and happy that their plans had finally been realised along with the organisational skills of Geraldine, Mick Griffin’s (Parnells GFC) sister.  The children departed with their host families and the adults went back to their hotel in Elstree.  An early night for everyone!!

The following day, the club’s committee and parent volunteers arrived early at Harrow Rugby Club (HRC) to set up:  footballs nets and pitches, coffee bar, tuck shop, bbq, registration area and endless other tasks undertaken and completed.  The kitchen was the busiest place with our lovely club ladies continuously preparing food from start to finish.  The day was blessed with fine weather and clubs started arriving from 10.00am.

Ballyporeen/Skeheen arrived in their coach and descended on the grounds in a ‘sea of red and black’.  The children got ready for their games along with their mentors and the remaining adults enjoyed the atmosphere and met with the other clubs.  They were obliging and undemanding and went with the flow and fielded two teams, one in each group which helped balance out the number of games played for all teams.

One of their teams got to the Conrad Cup Final after winning all their games in the group against Taras GFC, TCG and NLS.  They played Parnells in an entertaining game and came away with the silverware.  With the excitement of the football over, everyone could relax in the sunshine and enjoy the rest of the evening with the All Ireland replay to watch, a lovely meal and music to follow.

A late night ensued with plenty of laughter, singing and even a tug of war-bragging rights to Parnells there!  It was the club’s pleasure to present Ballyporeen/Skeheen with a commemorative plate marking their visit and club kit for all the children who travelled.

The following day, the club’s host families and all the children went to ‘Go Ape’ for a morning of outdoor fun and then stopped on the way back to pop into McGovern Park, Ruislip to have a quick walk around the revamped county clubhouse and grounds.  Re-joining their adults they made their journey back up the M4 to the ferry port for the trip back on the ferry.  Unfortunately we learned that they missed their sailing but thankfully got a later one and arrived back in Tipperary safely.

It is safe to say that even though it was a hectic weekend, the visit was a tremendous success and ties between both clubs grew even closer.  The success of the visit was down to the club committee and all the volunteers over the course of the weekend but in particular a few names must be mentioned in recognition of the organisation and work they tirelessly carried out.  Colin McGuiness (Chair), Veronica Bailey (Secretary), Ollie Sheehy (Vice Chair), Mick (Taz) Griffin (Manager), Maggie O’Rourke (Childrens Officer), Michelle and John Rattigan, some of whom hosted along with Liam and Sacha Moffatt and Tim and Tara Slattery  The entire list of everyone involved on the day of the Commemorative Games will appear in a special report exclusive to that event.  A special mention to Cormac Vaughan from our visiting club, one of the players who hurt his hand on Friday and we wish him a speedy recovery.

The hosting of a club was a wonderful and first experience in the Club’s history and one we hope can be repeated.

For more photographs, visit the Youth Section of the Gallery and select from the right hand side. 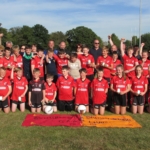